Aesthetic Design – Is it limited to “The Halo effect” alone?

What is Blockchain technology?  For those of you who are in the realm of the software technology, this might be a familiar term.

The Blockchain, a decentralized ledger or network, is the fundamental technology used for the implementation of the Bitcoin. The leaders and the pioneers of the blockchain are working real hard to ensure that it’s potential to disrupt various industries for more secure, transparent and democratic business processes are utilized and understood by all.

This article is a very small attempt to simplify the mysterious and vague Blockchain technology.

Satoshi Nakamoto – The Creator of Blockchain?

The bitcoin is the creation/invention of a person or a group under the name of ‘Satoshi Nakamoto’. And to implement the bitcoin, they conceived the blockchain database. In the year 2008, he published a paper titled,’Bitcoin – A Peer-to-Peer Electronic Cash System’ which describes an electronic cash system that would allow online payments to be send from one party to another without any third-party intermediary or financial institutions.

Till date, Satoshi Nakamoto isn’t identified and their active involvement in the development of the bitcoin stopped after December 2010.

Components in a Blockchain

Blockchain technology, when detached from bitcoin application, has far more uses and applications that can be achieved in various sectors.

The four main components in a blockchain are

Let’s have a  brief look into the components, to get a better idea on how this technology works.

From the very ancient times, ledgers have been used for commerce as valid records to track assets like cash transactions, property and investments. But these ledgers are centralized or in other words, they are controlled by a single entity or authority.

What are some of the drawbacks of these centralized ledgers? They can charge or penalize us without our approval and also accidental or intentional errors can cause huge losses to its clients.

These defects are eliminated in a decentralized or public ledger. It means it is a distributed database of all records bearing all digital transactions or events that have been performed and shared among involved parties. All transactions are transparent and public and accessible to all. Once entered, the information can never be erased.

The blocks of a blockchain are files where the data is permanently recorded in an encrypted or cryptographical format, which makes hacking next to impossible. It uses a hashing algorithm or cryptographic hash function that has a distinctive class of hash functions with various properties making it excellent for encryption. It can be compared to the page in a ledger book. Each time a block is completed, it will make way for a new block in the blockchain.

Thus, decentralized ledgers offer users total control over all transactions and records, paving way for the removal of third-parties and reduction of transaction fees. Thus, the digital ledger is definitely an amazing invention of our time.

Nodes in the Network

The blockchain consists of a powerful network where each and every connected computer is called a node or a peer. Each node in the network, generally speaking, assumes the role of ‘an administrator’. When a node joins a distributed network or a transaction is completed, they receive a copy or proof of the record in the blockchain. Any of these nodes can assume the role of a miner or a ‘full node’. For a full node, the whole blockchain is downloaded or copied into a single device that is connected to the network. This would ensure that the information stored will not be lost or corrupted.

So, this basically describes a peer-to-peer (P2P) network which doesn’t require a central storage system such as a server. They validate the transactions by consensus meaning majority vote.

An asset can be defined as anything of value, tangible or intangible, that is owned and can be converted to cash. Tangible assets include properties, inventories, currencies, machinery etc. Intangible assets are trademarks, patents, copyrights and goodwills.

Although the main objective of the bitcoin was to send and receive money through digital peer-to-peer network without an intermediary, it has slowly evolved into altcoins and the birth of tokens with various range of capabilities.

Cryptocurrencies, coins or currency tokens are digital tokens of value that are decentralized. And bitcoin is the ‘first born’ amongst them. Currency tokens like bitcoin are used to purchase goods. Few online retailers accept bitcoins as payments for various services. Some examples of digital currencies are Ripple, Litecoin, Dash, Peercoin etc.The BBC has a beautiful and really easy to understand video on how the cryptocurrencies work. Just How do Cryptocurrencies Work?

“A token is a specific amount of digital resources which you control and can reassign control to someone else.” by Antony Lewis

Tokens need a platform to live and work, platforms such as Ethereum, Omni, Counterparty, NXT.

There are different types of tokens like: utility tokens, asset tokens, equity tokens, reputation and reward tokens which can be used to do things, represent a physical asset or produce, for ownership and control, as a symbol of reputation or as rewards.

As blockchain is a distributed ledger with all computers or nodes working as administrators, it is important that the entire network agrees collectively to all the transactions in the network. Consensus mechanism, that is to say, would also mean – majority vote.

This is where ‘mining’ comes into play. Wikipedia says,’Transactions are recorded into distributed, replicated public database known as the blockchain, with consensus achieved by a proof-of-work system is called mining.’

When the nodes in a network compete to solve a cryptographic or mathematical puzzle is what mining is all about. The winner gets to update the public ledger and also wins a certain amount of cryptocurrency as a reward, also known as Block reward.

The most popular blockchain consensus mechanism or protocols are: Proof of Work (PoW) and Proof of Stake (PoS) systems.

Proof of work consensus mechanism requires the nodes to prove the work they have done to earn the rights to add transactions to the block. The cost and high energy incurred in this process makes mining very expensive. Some of the blockchain networks that use Proof of Work are Ethereum, Bitcoin, Litecoin and Ethereum Classic.

Proof of Stake was the answer to Bitcoin’s high cost of mining and a cheaper alternative to the high amount of energy it requires. Here, a node is determined as the winning ‘miner’ based on the number of coins that he owns. The more coins he owns, the more likely chance of him becoming the next validator.

Consensus mechanism plays an indispensable role in reducing centralization of the system that is in control of validating transactions; a fundamental part of the distributed architecture of a network.

A contract safeguards the transaction between two parties by  ensuring the fulfillment of either side of the bargain. It also lays down the rules or consequences when a contract is not satisfied.

Smart contracts streamline the rules and the lack of trust among parties with few easy lines of code.

The sequence of a smart contract can be compared to a chain-reaction. Where the completion of a term in the contract will trigger the next term till the contract is achieved. The agreements written in the code are automatically executed by blockchain nodes. Once executed, the contract is updated in the ledger and verified in the network using a consensus mechanism, eliminating the need for third-party verification.

Contractual agreements in today’s world take hours or even days for verification and execution.

All the uncertainty and distrust is erased with smart contracts that automated, reducing human error and saving valuable time.

The several benefits of smart contracts include verification, visibility, lower costs, self-execution, and clarity of agreement terms, protection from fraud and connectivity. 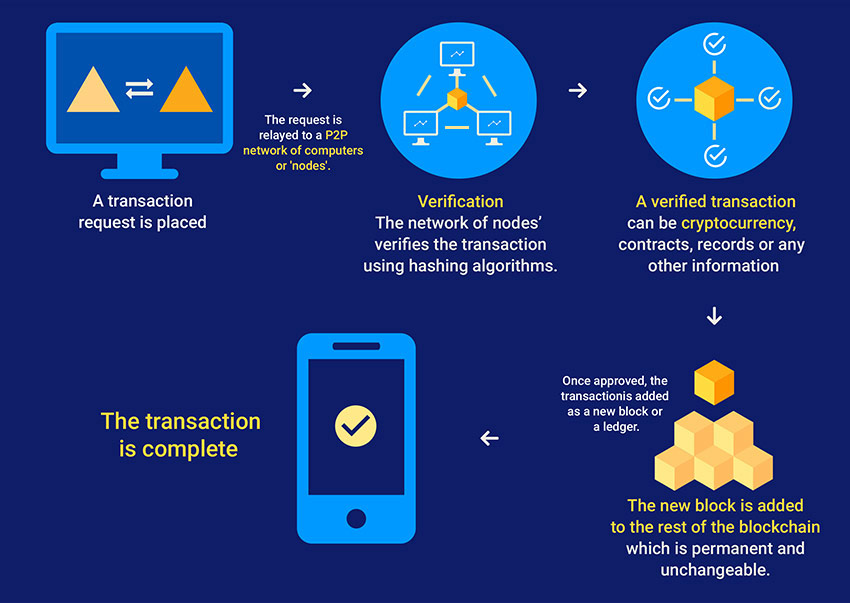 ‘The blockchain is an incorruptible digital ledger of economic transactions that can be programmed to record not just financial transactions but virtually everything of value”. Don & Alex Tapscott, authors Blockchain Revolution (2016).

The blockchain technology is relevant for any transaction of a digital asset that is exchanged online. Every transaction, between agreeable parties, is protected by a digital signature. Each transaction is transmitted to every node in the bitcoin network. It is then verified for validity before it is recorded in the public ledger. The verified transactions will involve all types of digital assets like contracts, records, cryptocurrencies or any other information.

A single transaction will be known as a block and once verified, it will be added to other transactions, creating a new block in the ledger. Thus a new block when added to other blocks creates a permanent and irreversible blockchain. Taking the early steps in understanding blockchain methodology brings us closer in comprehending this technology.

With new doors been opened for blockchain applications in diverse sectors, different blockchain platforms are being developed. The true potential of this technology is slowly being realized by these enterprise platforms. Ethereum, Eris:bd, Corda, Hyperledger, Ripple and Multichain are the few major and popular platforms around.

Ethereum, the most popular and advanced, is blockchain and protocol-agnostic platform for application development. It can write smart contracts that can call multiple other blockchains, protocols and cryptocurrencies. Ethereum has its own distributed ecosystem that supports a Turing complete programming language. “Ethereum is used as a protocol for decentralized applications, smart contracts and decentralized autonomous organizations, with a number of functioning, applications developed on it….,” New York Times.

The implementation of blockchain technology in various sectors is making way for disruptions like never before. A few prominent industries that feel the heat of these drastic changes are banking, real estate, legal, photography, finance, healthcare, politics, startups, videos, education, and infrastructure security.

Popular Use cases for Blockchain

Let’s have a quick look into some of the popular use cases in blockchain.

For more details on the different use cases of blockchain, do refer the article Blockchain for 2018 and Beyond: A (growing) list of blockchain use cases. By Flip Filipowski.

Whether we like it or not, the Blockchain is one of the greatest inventions of our times. It is slowly but surely disrupting sectors and industries for a more secure environment. The blockchain may seem to be vague and mysterious, but once the ‘fog’ settles and we are able to wrap our brain around it, I believe this technology, if put to good use, will go a long way.

Scalability is one of the significant aspects to be considered when enterprises are looking to build their appli...

Its 2014 and you’re looking for an app developer for your startup or your organization. And you might very well ...

Internal or Outsourced Software Development: What should Your Start-Up Consider?

Should you outsource the software development for your start-up or should you place your bets on an in-house tea...