Flutter vs React Native: What to choose in 2022

If Flutter vs React Native is your burgeoning question for this year 2022, guess what you are not alone. We no longer need statistics to know about the ever-growing popularity of mobile apps across the world. According to the latest report, global consumers are now spending an average of 4.2 hours per day using apps on their smartphones, an increase of 30% from just two years prior.

Regardless of the industry, every business needs a mobile app to offer customized services to their clients. Are you a part of the world’s most lucrative mobile app industry ? Developing native apps for Android and iOS is quite cost-intensive and time-consuming. On the other hand, you can develop natively-rendered mobile apps for iOS and Android using the same codebase at reduced cost and time with cross-platform development.

Cross-platform apps are highly popular for the obvious benefits. However, choosing the right framework is essential for efficient cross-platform development. In this blog, we compare the two market players React Native vs Flutter to help identify the framework that best suits your app development needs.

Before we dive deep into the comparison, let’s first know what is the difference between flutter and react native.

Unlike its counterpart JavaScript, Dart is relatively new and is an easy to learn language especially for developers who are more familiar with Java and C#.

Undoubtedly, the modernity of the language is its inherent advantage. It comes with both ahead-of-time (AOT) and just-in-time (JIT) compilers and is at times faster than JavaScript.

Flutter has a layered architecture that comes with a wide array of in-built components. The layered architecture enables easy and quick UI customization giving the user control over every single pixel on the screen. The combination of Dart framework with a Skia C++ engine ensures that no bridge or medium is required to interact with the native modules. 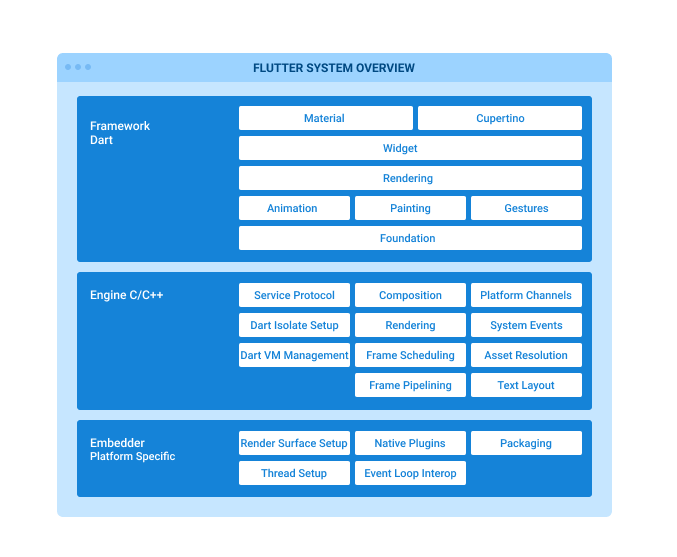 Top Companies that opted for flutter

What is React Native ?

React Native is one of the most renowned cross-platform mobile development platforms. It is an open-source framework built upon the React library that uses JavaScript.

Created by Facebook React Native is based on the more generalized React. It is built for mobile app development, especially cross-platform app development. The platform enables the development of robust apps for multiple platforms like android and iOS using a single code base. “Learn once, write anywhere”is indeed the main objective of React Native.

The flexibility of the platform comes from the JavaScript Bridge used as a runtime environment for the app to function. This “bridge” is used for bidirectional and asynchronous communications between the Native language modules and the JavaScript code.

React Native is based on the popular programming language JavaScript.It is a client scripting language that makes the web pages dynamic in nature. The huge popularity of JavaScript can be attributed to the fact that it is much easier to find React Native developers.While developing apps using React Native, JavaScript or JS uses a library known as React.

React Native is based on Facebook’s Flux architecture. Facebook utilizes Flux for the client-side web application and it focuses on the unidirectional flow of data. The architecture consists of – 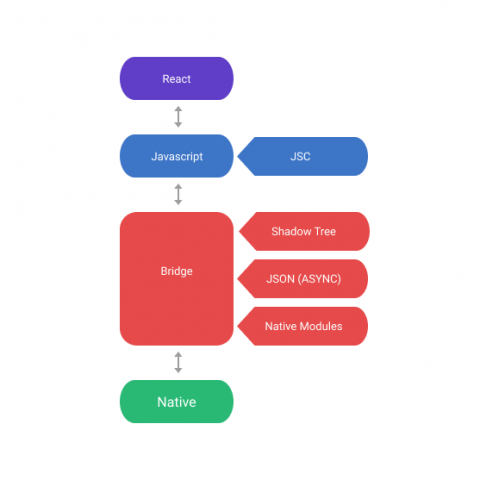 The key aspect of the current architecture is that communication between JavaScript code and Native elements rely on asynchronous JSON messages transmitted across the bridge.

Let’s take a look at the features that make Flutter an ideal choice for cross-platform app development.

Flutter, like any other cross-platform technology, enables developers to use the same codebase for developing iOS and Android apps. This not only speeds up the development process but also reduces cost as you do not need two teams to work on the code.

With the hot reload feature, changes made to the code are immediately visible to the developers in the app preview without having to reload the entire app. As the widgets are immutable only the screens you are currently working on undergo the reloading process. This results in easy bug fixing while enabling developers to experiment with multiple UI elements and features.

This architecture pattern is called BLoC (Business Logic Components) and it utilizes streams to separate the app’s user interface from the business logic. Unlike other patterns, in BLoC pattern UI is not loaded with delays. This prevents delays in the app’s performance as animations and screen scrolls work smoothly while the data is loaded from the server. 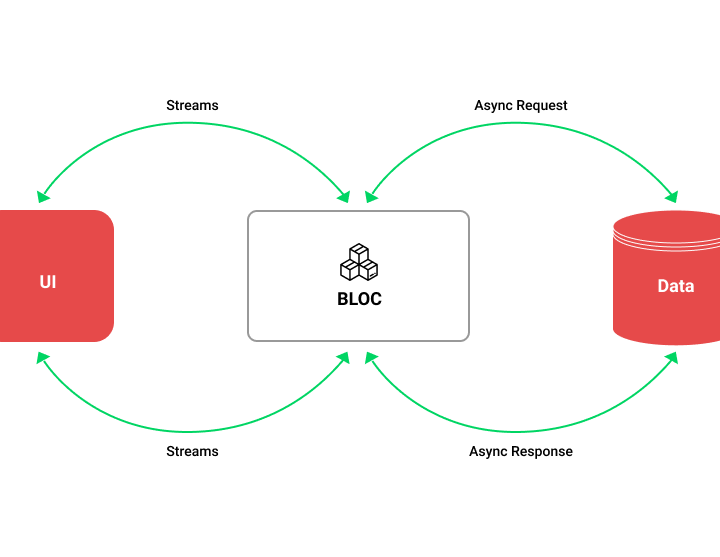 Flutter has its own rendering engine and this ensures that apps are not affected by any OS update. They still offer the same look and feel in terms of the interface even after a system update.

The final performance and responsiveness of the software are not affected by the number of nested objects in the Flutter code. This is because when the layout is processed there are no recursive calls. Further, Dart can be compiled into the native code in order to enhance app performance.

React Native is based on JavaScript,which gives access to an extensive base of ready-to-apply components and packages. This significantly reduces the development time.

In React Native 0.61, the “live reloading” and “hot reloading” features are combined into a single new feature called “Fast Refresh”. It fixes all the issues of the Hot Reloading feature and provides a great developer experience that speeds up both bug fixing and the development of new features.

React Native employs declarative programming. Unlike native development, it eliminates the need to create a sequence of actions in the app. As a result, it is much easier to spot bugs on the path a user takes.

One of the biggest advantages of using React Native is the huge community support. A developer facing any issues can easily fall back on the community for support.

Without further ado, let’s get started with React Native vs Flutter comparison. We will be comparing the two technologies based on the following criteria

React Native relies on the JavaScript Bridge to communicate with native components. Thus, it takes more time to load elements. Whereas, Flutter offers much faster performance as it compiles the code ahead of app run time.

As Flutter is based on Dart, it comes with comprehensive automation test support.Flutter developers and testers have access to a wide spectrum of testing features for unit, integrated, and widget testing of the applications. Further, it also provides detailed documentation about automated app releases. In stark contrast, React Native only offers a limited set of tools for unit testing and zero testing support for UI level and integrated testing.
Winner– With React Native developers depending on tools like Appium and Detox for UI level testing and no automated app deployment support, Flutter is the winner.

React Native has Flux architecture for building React components. As mentioned earlier, it uses JavaScript to bridge the communication with the native modules. The bridge affects the performance slightly. But Skia for Flutter ensures high cross-platform portability without using a bridge.
Winner-Flutter

Flutter vs. React Native-Ease of Installation

You can install React Native from Node Package Manager. Developers with knowledge of JavaScript can easily understand it while other developers need to understand the functioning of NPM. For installing React Native on macOS, you would need another package called “HomeBrew”.

When it comes to Flutter installation in Windows or macOS, you have to download the installation bundle(Zip file) of Flutter SDK. But then you have to add flutter to the “PATH” variable making things a bit complicated.

Winner-When it comes to ease of installation, Flutter is the clear winner.

Both Flutter and React Native come with guides to help you get started. But React Native offers little to no information about setup and command-line tools. Whereas, Flutter provides detailed information about setting up the platform. It even has a Flutter doctor to guide developers during the entire process.
Winner– Flutter with more comprehensive documentation is the winner

Google’s Flutters comes with enhanced flexibility and scalability as the platform is easy to access and integrate. On the other hand, React Native with a virtual DOM & React library, is an incredible framework to build scalable components. Even though it is used in huge apps like Facebook but in certain cases like that of Airbnb it turns out to be too low. This forced the company to switch back to native development as their codebase using React Native became unmaintainable.
Winner-Flutter comes with better scalability capabilities.

Upgrading and debugging the code is a pain with React Native. Once you start making changes to the code to cater the application needs, it interferes with the framework’s logic and slows down the development process. Further, almost all the native components come with third-party library dependency. In the long run, it becomes difficult to maintain these libraries as they get outdated.

In contrast, maintaining a Flutter application is much easier. The simple coding enables developers to easily spot bugs and source external tools. In addition, making immediate changes to the app is easier in Flutter.

React Native’s hot reload feature helps developers save big on time when it comes to UI testing. Further, the platform comes with excellent IDE support as developers can use any text editor or IDE of their choice. Even though Flutter comes with a hot reload feature, developers need to learn new Flutter concepts as the complexity of apps increases. Also, Dart is not a common language and as a result numerous text editors and IDEs don’t support the same.
Winner-React Native ensures better developer productivity.

The learning curve for both the frameworks completely depends on the developer’s knowledge of the programming languages. As most developers have some kind of knowledge in JavaScript, React Native becomes a natural choice. But compared to its counterparts like React Native and Java, Flutter is much easier to learn and use even for new developers.
Winner-When it comes to the learning curve, it is a tie between Flutter and React Native.

In this blog, we have highlighted the major differences between the two competitive frameworks . As with everything else, both frameworks come with their own set of pros and cons. Despite the fact that Flutter proved to be a better choice in almost every React Native vs. Flutter comparison,choosing between the two frameworks depends on several other factors like target audience, project goal, time and budget constraints.

Are you in search of customized app development services ? Get in touch with our experts and we can help you develop stunning app solutions from scratch to success.

How to Write a Great Mobile Applcation Requirement Document?

A carefully crafted requirements document communicates what to build, for whom to build, and how it benefits the...

Native App vs Hybrid App vs Web App: What’s best for your Business in the Long Run?

Looking to develop an app to accelerate your business growth in the long run but unsure on Native App vs Hybrid ... 10 Top Mobile App Development Companies in US, UK, Canada and India in 2022

We’ve curated a list of Top Mobile App Development Companies in US, UK, Canada and India who can help you develo...