ReactJS is a powerful and ultimate open-source JavaScript library for designing awesome user interfaces for big, medium, and small single-page applications overcoming all possible bugs and challenges during the development. ReactJS is maintained by World’s biggest social media platform, Facebook, and its subsidiary, Instagram and a group of open source developers and corporations.

As ReactJS has to be a supreme of its kind, the developers behind the JavaScript library developed it with the intention to help developers in creating large applications that use data and get updated over time. While originating ReactJS, the developers wanted it to be simple, composable, and declarative as it is now. We could simply say that ReactJS takes care just the user interface like an app. It is the only view in the model–view–controller (MVC) software pattern. To easily coordinate ReactJS with other JavaScript libraries or larger MVC frameworks like AngularJS is certainly one of the highlights of it. It is also coded with React-based add-ons to work on non-UI parts in a web application. Startup speed, runtime performance, and modularity are the key influences of ReactJS.

1. The React Components are the future of web development
Shadow DOM and frameworks such as Polymer JS mattered to create big waves recently. The core concept of Polymer JS is to create self-contained and customizable elements that you can import and apply in your projects. Though this is a supercool idea, ReactJS steps over it. in this scenario, Shadow DOM is not used, but however provides the power to the developer to customize own components that you can be reused, combined, and nested later. ReactJS is considered to be the single-biggest productivity boost since the easiness it offers to define and manipulate customized components.

2. Only the User Interface
People use ReactJS as the V in MVC. Especially it’s very simple to experiment on a small feature of an existing project as React has no assumption about the rest of your technologies.

3. ReactJS Data Flow
It helps to work better than the traditional data binding as there is one-way reactive data flow which reduces boilerplate.

For DOM tree manipulations ,Diff algorithm plays an important role here as it plays to be a dirty checker itself. It is used to see if the DOM is dirty instead. At present, DOM manipulations using dirty checker (continuous model checking ) that needs o(n^3) time checking. But, all that react.js needs is only an o (n) times checking since it uses observer model. In observer, model can perform very well in case of dom nodes with minimal changes, that means the changes like child nodes position changes, add a new one, edit, delete a node etc.

4. Virtual DOM
ReactJS provides a virtual DOM which is actually fake and making users to stay within React’s “faked browser” which certainly results in better performance. React is not directly connected to the DOM for fast actions. It maintains a fast in-memory representation of the DOM which also improves the speed. 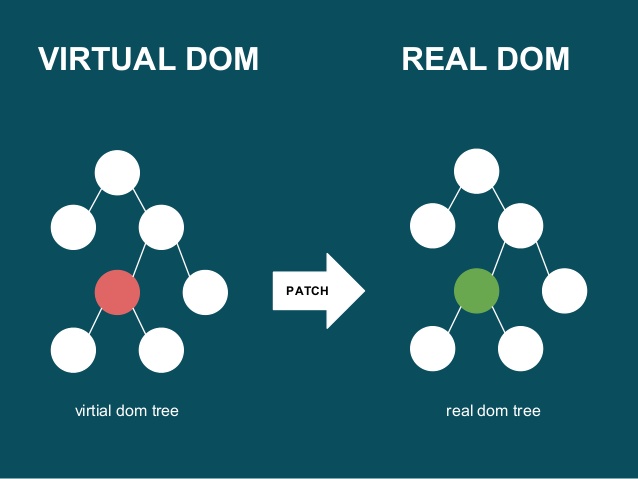 5. ReactJS is extremely efficient for DOM manipulation
ReactJS’s approach of creating its own virtual DOM improves the flexibility and performance and helps itself to update the DOM tree over time to time, which makes updates in a very efficient manner.

6. ReactJS improves SEO ranking of a website
One of the major faults with JavaScript is that it’s not SEO-friendly. The reason is simple that it’s hard to read JavaScript-heavy applications. However, ReactJS overcomes this issue since it can be run on the server. On the other hand, the virtual DOM will be rendered and returned to the browser as a regular web page.

7. Writing JavaScript easier
It looks so simple now to write JavaScript. Using JSX syntax one could mix up HTML with JavaScript. It’s strongly recommended to work on the new syntax rather than writing the code in plain JavaScript. The other interesting parting with React is you don’t have to link to HTML bits with strings to function. And it feels very realistic with a special JSXTransformer.

8. ReactJS gives developer tools for chrome
It’s a must do to install the official ReactJS chrome extension while you start coding on React.js, which helps you to easily inspect and debug codes. Once the chrome extension is installed, you can have a direct look into the virtual DOM just like you browse a regular DOM tree in the elements panel.

10. Facebook are maintaining ReactJS
React.js was an inventory of Facebook team. They developed and updating ReactJS for applying on FB and other internal purposes. Later, FB decided to release out ReactJS as an open source to the world. FB’s some great portions and FB owned Instagram’s whole section was developed using ReactJS. React is currently used by many biggies like Deezer, Airbnb, Atlassian, Netflix and many others.

Facebook, the inventor of React.js uses it to write codes in many features such as commenting interface, business management tools, Lookback video editor, page insights, and much more.
Instagram.com is the greatest model of ReactJS as it’s wholly built on it.
It’s used by Khan Academy for most new JS development.
Sberbank, Russia’s number one bank, is built with React.
The New York Times’s 2014 Red Carpet Project is built with React.
Sony’s Lifelog newly released web interface is using #refluxjs and #reactjs on the client-side. http://lifelog.sony.com/
Yahoo Mail is moving to React

Check out a code segment of React JS

Why You Need a Product Thinking Development Team

In today’s competitive and meta-cognitive world, designing a product means designing for the future. If we view ...

Eclipse has an amazing set of tools in the form of plug-ins which we can go on adding to the Eclipse platform an...

Reviewing “callback hell” before the first cross-platform release of yield in node 0.11

As we all await the first cross-platform release of yield in node 0.11, we thought this would be the best time t...