CSS variables, more accurately known as CSS custom properties, are landing in Chrome 49. CSS is going to be like a CSS pre-processoritself such as SASS,LESS inthe future.  CSS variablesare now officially part of the CSS specification – details here.

CSSWG was experimenting about CSS variables since 2012 – details here . There is another news thatGoogle has now joined Mozilla by supporting this great feature.

I already mentioned that CSS variables are known as CSS custom properties.

Create a Variable ( You can declare anything in variable such as color, width .. )

We can override all css variables – see the demo.

We can include the variables with a different value in media query break points.

you can replace ‘element’ with ‘body’ in this below code 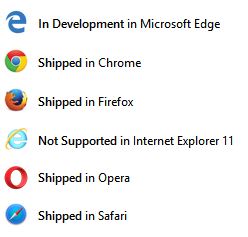 We can check browsers supporting details- can i use

Mozilla has posted an article about this – link

CSS had already introduced calculation featurescalcit is an amazing feature, another one isflex-box, now they have introduced a variable feature.
Without doubt, we can say CSS Variables will be a supreme feature in future, at the moment it works only in the latest version of browsers. Web developers are really excited with that CSS as it is going to be awesome.!!!

Browser standards and new practices for CSS to come #html5defcon

After the end of day 1 at the inaugral HTML5 Developer Conference of Kerala in the lively campus of XIME near Ka...

THE MOST USEFUL CSS3 FEATURES

Though HTML is the core of a web, we know we can’t imagine it without CSS. CSS is an extremely powerful style sh...

CSS3 has introduced a new layout method, the ‘revamped’ Flexbox with excellent browser support. I had written a ...