React Native Vs Native App Development: Which is better in 2022?

React native and native are undoubtedly some of the key market players in the app development industry. Most industries used traditional ways and wrote their applications in their native language, designed for different platforms. However when the features of reactive native vs native app development were considered, it wasn’t long till a different trend was picked up and the boost of Facebook, Instagram, Pinterest, Skype, and so on contributed to the rise of React Native, a simpler method to write mobile apps, developed by Facebook. React Native allows developers to write mobile apps similar to writing web apps, with an extensive and popular language, javascript.

With all these factors and native being branded as ‘traditional’, one may assume that react native is just the next step post native app development. However, both frameworks have shortcomings of their own, and what truly makes sense for the company, in the long run, is to choose a framework that can work post-deployment of the app, is easier for maintenance and troubleshooting, and works best for their app requirements.

But is choosing between react native vs native apps as easy as flipping a coin? Here’s a detailed approach, to help address that question.

What is native app development?

If your organization is looking to develop an application only for the App Store or specified for the play store, native app development could come into play. Native applications are built with tools that enable them to run on a specific platform. Hence, if you were to launch one for the app store and play store, one would require two development teams to build two different versions of the application.

From the developer’s end, this would mean using Java to build an Android app or Swift and Objective C for iOS. So, how does this translate to being a good option for app development?

Native apps have a notably high performance which delivers an exceptional user experience. The better the user experience, the higher the customer retention. As all the tools help tailor the application to the platform, from visuals to user interface, the overall experience is smoother.

What is react native app development?

For a generation of instant gratification and tailored experiences, one such framework that can help create experiences across a multitude of devices is react native. While the concept of React Native is luring, due to the options offered, the disadvantages are swept under the carpet.

When the process of react-native vs native development is considered, for an app running on different platforms, it is crucial to maintain a quality that provides an optimal customer experience. With React Native, the user performance will not match that of Native. Post-deployment and performance tracking is crucial, along with expert developers for troubleshooting of any sort, when React Native is considered.

React native versus native app development: which option should you be leaning towards?

Before jumping into choosing between react-native vs native app framework and getting started, factors such as development cost, duration, user experience, and the type of application need to be considered. These choices eventually are visualized back in the form of app performance, return on investment, and customer retention. Hence the need, contrast, and pros and cons of react-native vs native app development must be thought about before making a discussed team investment in the framework.

There are many advantages that tag along with a traditional framework that is built specifically for Android or iOS platforms. In a comparison of react-native versus native performance, Native apps have the upper hand in terms of performance, post-deployment performance metrics, and accessibility to features within the platforms. Some of the highlighted pros include,

In the case of a react native vs native iOS app, since native apps are developed particularly for a platform, the developer or the organization would not have to worry about other platforms. When a dedicated platform is present, lower code writing is possible, easier integrations, smoother user experience, easier debugging process, and other features tag along. There is no worry of app reliance between different versions of the app for iOS or Android.

With a native app, tags along with the pros of the features of the OS and the software. For instance, when a react native vs native android app is considered, native apps can directly access device hardware such as camera, microphone, location to ultimately provide the user a better experience unlike React Native. Another big benefit is offline usage, where, if the app’s features have been downloaded, it can work without any connectivity. Examples of these include organizers, planners, productivity timers, games, and so on.

Native apps integrate with the features of a system’s OS and hence are safeguarded by the security features within the OS. In the case of apps built using react native, they are dependent on third-party integrations, system browser security, which can be a window for malicious attacks. Native apps only utilize APIs and are usually devoid of any third-party integrations, making it safer for the user and the platform.

In react native vs native development, as the native apps are included in the respective App Store and Play store, there are constant stable updates to enhance the user experience for a crash and glitch-free app function. Native apps also tend to have lesser bugs due to the reduced dependency on cross-platform tools. As the codebases are different, the development team can handle troubleshooting better, compared to having a single codebase for two different platforms.

With most apps, the native app development journey does not stop at deployment. It requires constant app updates if the platform that it is built for updates, has added features or undergoes major changes. When react native vs native app development is considered, the recurring cost of maintenance, along with the presence of a developer team to handle the same should be assessed. It is essential to discuss prices, features and custom plans with a software development company in the case of outsourcing. The complexity increases when compared with a hybrid app’s maintenance.

In the overall cost of developing a react native vs native apps, the latter is higher compared to a react native app due to the platforms, the framework, and the duration involved. Native app development involves building and maintaining multiple codebases, with updates, maintenance, and troubleshooting for each platform. Native apps for Android would use a framework like Java or Kotlin, but for iOS, the framework used would be swift or objective C.

The costs increase overall as a native app developed for one platform cannot be repurposed for another. The code has to be rewritten altogether. The functionalities executed are also OS-specific and hence if an app has to be available for different platforms, native app development would be a costly and time-consuming process. 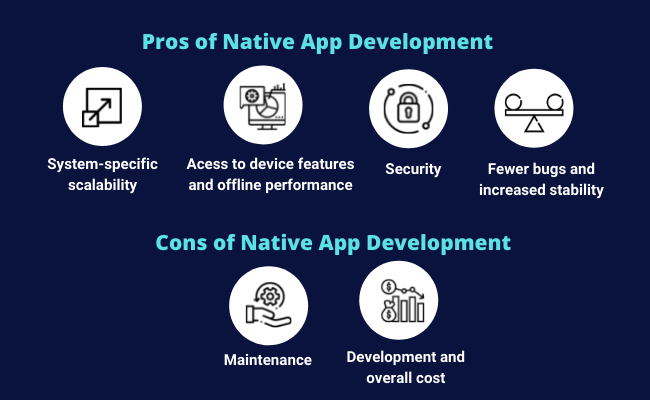 It was in 2015 that Facebook created a framework for efficient app development while retaining most features of a native application. Using react native, mobile developers can build apps for cross platforms and deploy faster, saving time and effort. Popular platforms such as Walmart, Airbnb, Instagram tend to use React Native to cater to their customer base.

Considering the features of react native vs native development, A feature of the former called ‘live reloading’ and ‘hot reloading’ helps developers view changes in a preview window while writing the code, allowing for a ‘real-time feedback’ simultaneously. The app reloads automatically as newer code is saved, which helps cut back on development time. Live reloads help reload the entire application after a change of code, while hot reload patches the code that was changed and does not reload the entire application. This provides developers with ease of operation, unlike the developmental processes for native apps.

Javascript is the most commonly used programming language in the world, and the stats don’t lie. Around 68% of developers use Javascript on a regular basis and hence is embraced by most developers. Not only is this beneficial to the developer, but this also helps the company choose a developer team based on programming language rather than the platform that the app is being developed for.

Having an in house team or an offshore software development team that is experienced in Javascript and React Native is crucial for the app development process. Comparing the architecture in react native vs native app, it is due to the intuitive modular architecture of React Native, that the developed applications can be easily upgraded.

When an organization plans for an application that can be used on multiple platforms, react-native comes into play. As open-source software, not only is there a repository of information, troubleshooting, and maintenance tips from a plethora of developers, the need for building an application is only once, throughout Javascript. This is in huge contrast with respect to duration and effort, compared to native apps that require rewriting code for each platform.

If there is a major thing that native apps have been applauded for, it is their user experience. While there are some third-party integrations and APIs that react native may have to work around, React Native can still provide a customer satisfactory user experience for moderately complex applications. In react native vs native development, leveraging graphic processing units and technologies such as AR/VR and IoT for react-native can provide a close to native performance for applications.

With cross-platform app development, tag along the numerous security aspects which vary according to the platform. There might also be issues with package compatibility or debugging tools. While React Native is a platform used by several top performers, it is still under development. Hence, having React Native proficient developers in your team is necessary to cut back on the maintenance and troubleshooting duration. The security of third-party integrations is also to be considered as not all are properly tested and trustworthy enough to be integrated into your app development.

React Native supports a variety of modules. However, it does not support all the solutions and hence can fall short at times when a specific solution is required, or one that is outdated to an OS is required. There are cases that may require the building of a custom module, which can be less time-consuming than trying to find the specific component elsewhere. 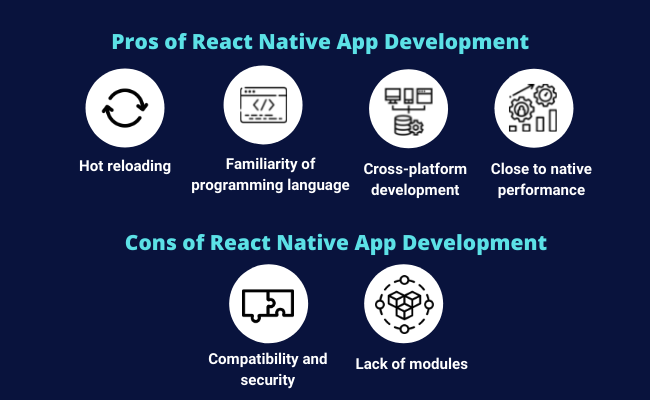 Prior research on react native vs native app development can help a company understand the choice of a framework based on their requirements. The total app development cost depends on factors such as,

How much does building a native app cost in 2022?

How much does building a react native app cost in 2022?

Based on project needs and complexity, one can utilize the budget accordingly to outsource on a full-time or part-time basis. This forms an affordable option compared to developing the in-house team. A contribution to the cost-effectiveness is the features of react native, which aims to reduce development cost, with tools such as React Native with JS Library integration. By leveraging the Javascript framework, one can develop efficient apps for web platforms, iOS, Android, and so on. The starting range of a react native app based on complexity can be anywhere from $2500 and above, as the features, hours put in, development time increases.

E-learning app development and cost: How the pandemic has changed the system of education for the better in 2022!

Healthcare Cloud Computing: Is virtual and remote healthcare the future?

With remote and virtual healthcare on the rise, learn all about making the shift to healthcare cloud computing!